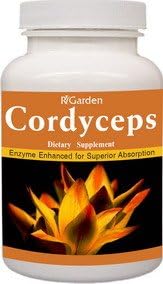 Do you know what is the superiority of this R-Garden Cordyceps Mushroom Supplement ?

Since the early 1990s, Cordyceps has become more widely known for is ability to increase physical stamina. In 1993, at the World Track Field Meeting in Stutgart Germany, China s Wang Junxia broke the world record in the 10,000 meter race by an astounding 40 seconds at 29 minutes and 31.78 seconds. Since then she has broken several world records in distance races. She performed so well that officials suggested she might have been using illegal steroids. But testing proved she wasn t using illegal substances. She attributed her success to rigorous training and a special herbal drink she took after each training session. Her secret – Cordyceps Sinensis Cordyceps contains many amino acids, minerals, vitamins, trace elements and its own unique active compounds such as adenosine, cordycepic acid, and polysaccharides. Adenosine is an energy carrier that helps support the transfer of energy throughout the body. Cordycepic acid seems to improve circulation. The polysaccharides help boost the immune system. Modern researchers have found that Cordyceps seems to help maintain normal respiratory and heart functions, normal kidney and liver conditions, support the immune systems, increase energy levels, and enhance sexual function. Also, Cordyceps may have a positive effect on memory, appetite, and sleep patterns. Cordyceps is a unique nutritional herb that has been used for many centuries in China, Japan, and other Asian countries. From a nutritional viewpoint, Cordyceps is a well-balanced nutritious whole food. Each vegetarian capsule contains 500 mg of Cordyceps Sinensis and 20 mg of Lipase.

See more 2 reviews on this product